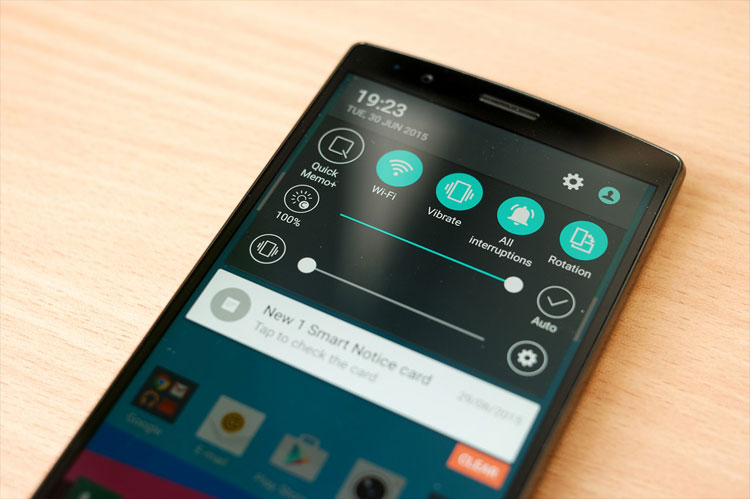 There used to be a time when smartphone devices from LG were viewed as modest possessions that were always overshadowed by the bolder and fancier phones from Samsung and their likes. Not anymore the latest LG G4 smartphone is the latest offering from the dynamic player in the smartphone industry.

LG has rapidly gone on to become one of the biggest challengers to these traditional giants in the market.

The new LG G4 comes with an Android 5.1 operating system that is supported by the Optimus user interface. This gives maximum convenience and user-friendly navigation.

The screen cannot be described as too large but is fairly convenient compared with other devices in the same product category and price range. The 5.5 inch screen has IPS quantum display technology.

Along with this, the screen has an excellent resolution measuring 2560 by 1443 roughly translating to 528 pixels per square inch. However, this is not very different from what the company has already been offering in earlier models. Surprisingly, there is nothing novel about the screen size either considering that many similar phones on the market offer the same 5.5 inch diagonally measured screen size. What is new though is the display screen which is a considerable improvement over the previous offering from the same company, the LG G3. The lighting on this phone is more efficient and complex which is a good thing because it creates a completely new user experience. The use of white and blue LEDs for backlighting along with color filters gives some unique lighting effects on the screen. As a result the colours are not only more vivid but they do not appear too harsh or place excessive strain on the eyes.

The developers have installed a very efficient processor in the LG G4 which is the hexa-core Snapdragon 808. Storage capacity of the device is appreciable as it comes with 3GB RAM along with 32GB of microSD expandable storage.

The LG G4 has been fitted with two cameras—a rear one and a front one—while many leading manufacturers skip on any one of the two causing much frustration to the user. The front camera is fairly efficient with an 8 megapixel capacity. The rear camera, however, is the star of the show and comes with a 16 megapixel functionality along with an f/1.8 lens. A single-LED flash has also been provided to ensure the best results with your photographic endeavors.

The phone offers great connectivity to the user which includes Wi-Fi, NFC and IR connectivity along with Bluetooth 4.1 apt-X. The phone is equipped with a 3000 mAh battery which is possibly the only downside to this amazing value for money phone.

The most distinctive thing about this phone that absolutely catches your eye is the leather backing. This gives an oomph factor to the LG G4 that other phones simply cannot deliver with their plastic backing and glaring colours. Apart from that the technological superiority of the phone is quite evident from the features that have been described above.